Just back from presenting my thoughts as a photographer who often works at protests and demonstrations. I'd been asked by a friend of a friend if I would be interested in explaining my experiences to a group of undergraduate students on a Politics and Protest module at Liverpool John Moores University. And while a little nervous at standing in front of a big class and talking for a couple of hours I jumped at the challenge. In the end I had nothing to worry about as the group of students seemed interested and after a little prompting made a load of interesting observations and came up with some great questions. Obviously a good portion of the presentation was taken up using photos and rather than duplicate what already is on this blog, I'll just link back to some relevant items; Starbucks tax protest , UK Uncut in Liverpool , James Larkin March 2012 .

I started off outlining a basic legal framework under which a photographer at protests operates and then looked at a couple of case-studies; UK Uncut and then far-right activity in Liverpool in the last year. Finally I concluded explaining some professional and ethical considerations and some personal challenges working in this area.

Obviously after one session I don't claim to be an expert in photography education but preparing for this session really made me think about my work and this personal project in great detail. And of course it was nice to have a captive audience for a little while !

Work for a freelance photographer is never easy and in recent days has got much tougher ... Read more...

Taking the Ice out of Iceland

A landscaped based personal project from a recent trip to Iceland, looking at obvious visual natural features resulting from climate change. Read more... 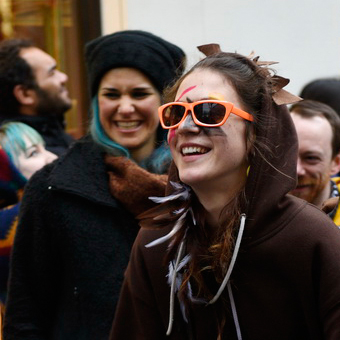 I haven't covered any street protests for a while but had heard good things about an action in the city centre ... Read more...